On 15/16 January 2018, a symposium on the subject of 'Environmental risks in water research – Inter- and transdisciplinary evaluations and perspectives' took place in Karlsruhe. The aim of the symposium was to present approaches and methods from different disciplines with a focus on environmental risks to enhance integrative approaches in water research.

On the first day, three keynotes were held on the common subject of the symposium. Ortwin Renn (Director of the Institute for Advanced Sustainability Studies, Potsdam) talked about the challenges of systemic risks. He explained the basic concept and its application in water and environmental research. Janet Hering (Director of Eawag, Dübendorf, Switzerland) commented on the role of science in the decision process to upgrade Swiss wastewater treatment plants for micropollutant removal. Katrien Termeer (Professor of Public Administration and Policy, Universiteit Wageningen, the Netherlands) presented her research on governing climate change adaptation through a strategy of 'small wins'. The keynotes were followed by a plenary panel discussion with the keynote speakers on the challenges and strengths of inter- and transdisciplinary research. The focus was in particular on the role of young scientists in this process.

After the lecture programme, a poster session took place. 34 posters from different disciplines were showcased. The scope of topics included the 'analysis and governance of drought events', 'integrated water resources management', 'micro-contaminants in the environment' and further interdisciplinary issues. A jury honoured the three best posters with a poster award (in the form of a travel allowance for a conference).

In the morning of the second day, speakers from universities in Baden-Württemberg took a closer look at risks from different disciplinary perspectives. The first session focused on pollutants in the water cycle. In his lecture, Daniel Dietrich (Professor of Human and Environmental Toxicology, University of Konstanz) discussed the question to what extent nano- and micro-contaminants pose a problem. He used examples of fate and behaviour as well as bioavailability of nanoparticles in the environment and addressed the problem of mixture toxicity and regulation. Ute Mager (Professor of Public Law, Heidelberg University) gave a lecture on restricting contaminant input according to the requirements of the Water Framework Directive. At the end of the session, Jale Tosun (Professor of Political Science, Heidelberg University) talked about water pollution in the public perception by means of communication strategies of environmental groups.

The second session dealt with risks arising from extreme events. Antje Witting (Postdoc in the working group for Empirical Theory of the State, University of Konstanz) showcased her research findings on evidence-based flood risk management in the Denver Metropolitan Area. Tatjana Krimly (Production Theory and Resource Economics) and Andrea Knierim (Professor at the Department of Rural Sociology) from the University of Hohenheim focused on flood risk in agriculture by pointing out different perspectives of various groupings (companies, administration). Finally, Kerstin Stahl (Professor of Environmental Hydrological Systems, University of Freiburg) talked about risks of drought in the Anthropocene and dealt with the question 'What is an extreme event today?'.

A total of 131 participants took part in the event. Most of them were scientists from natural and engineering sciences as well as social sciences and the humanities. Furthermore, representatives from environmental authorities and associations participated in the symposium. Particularly gratifying was the great interest of young scientists. 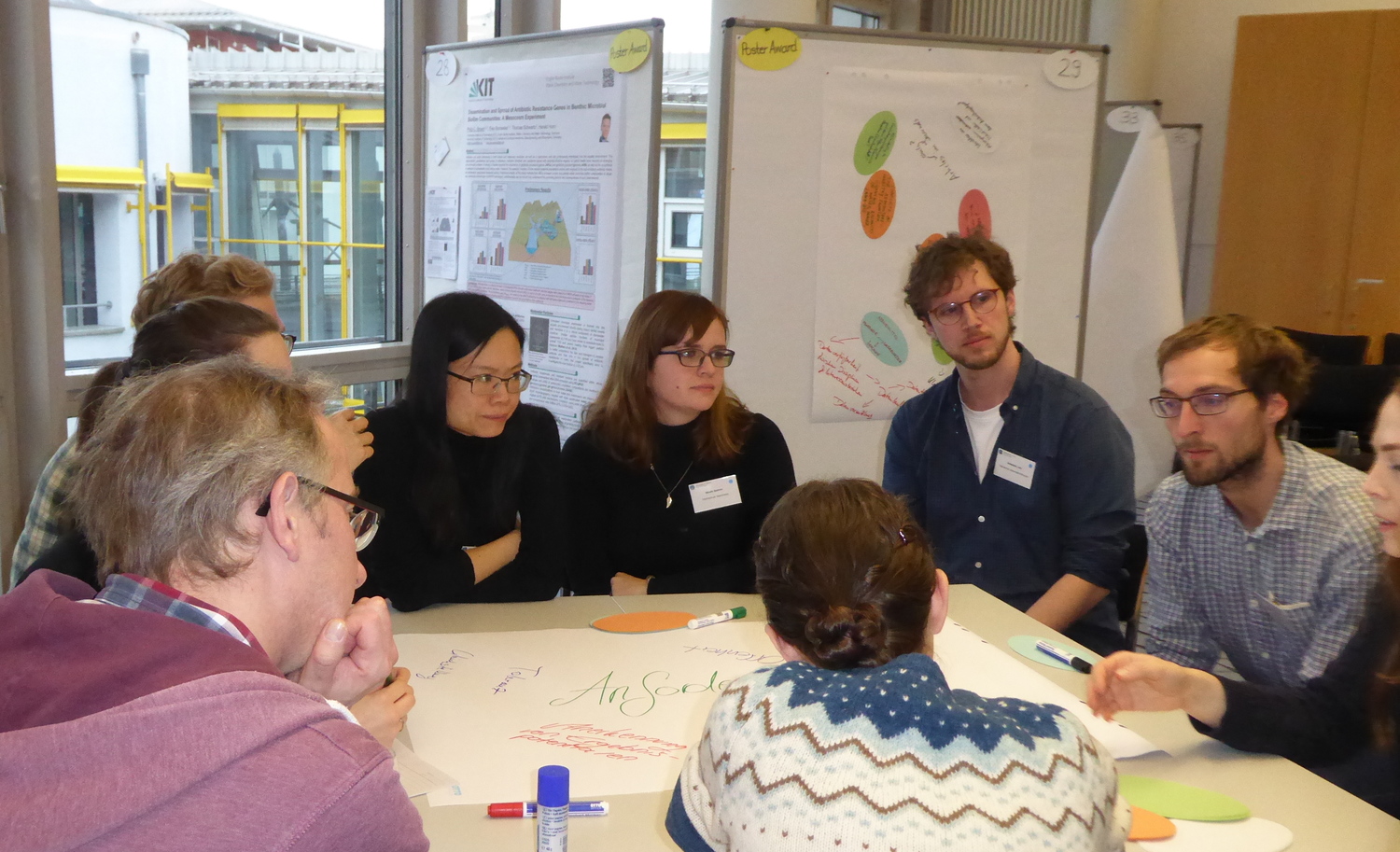 Following the symposium, in the afternoon of the second day, a collaborative workshop for early career scientists took place in the form of a World Café, which was attended by 33 young scientists from different disciplines and career levels. At four tables, questions on content, problems and requirements of interdisciplinary collaboration in water research were discussed. Afterwards, the results of each table were presented in plenary.

If you are interested in the results of the workshops, please refer to Ulrike Scherer from the Coordination Office Water Research Network.

PROGRAMME of the symposium